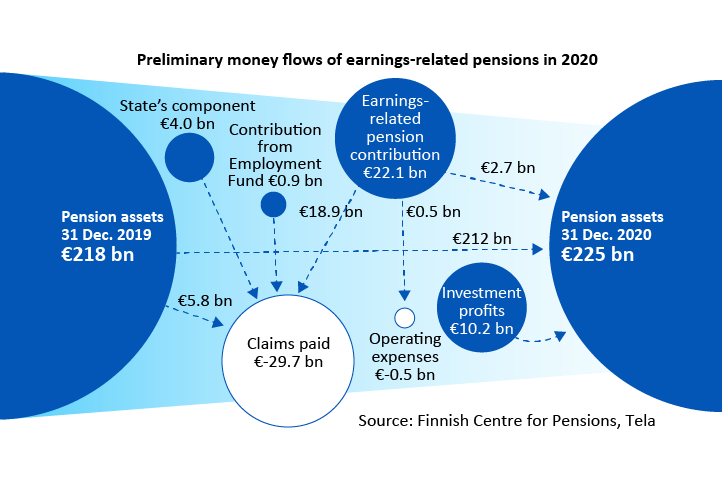 As a result, earnings-related pension assets increased by seven billion euros and amounted to 225 billion euros at the end of the year. The value of investment assets accounted for 221 billion euros.

The stock market’s historical nosedive in the corona spring wiped tens of billions from the value of pension assets. However, the investment market recovered rapidly on the back of massive central bank stimulus and returned to positive growth towards the end of the year.

Early fears of solvency crises spinning out of control never materialised, and in contrast to the 2008 financial crisis there was no need for emergency legislation to protect pension assets.

The Finnish economy has so far weathered the corona storm reasonably well. Payments of pensionable wages fell by no more than 0.4 per cent from 2019. The wage bill for private sector employees decreased by 1.3 per cent. Contribution revenue in 2020 fell as a result of the move by central labour market organisations to lower earnings-related pension contributions from May through to the end of the year. In this situation the cyclical buffer provided by pension fund reserves was harnessed for economic stimulus.

“In the early stages of the crisis there was much uncertainty and a real sense of alarm. Fortunately, the situation calmed down by the summer and the figures for the turn of the year were a positive surprise,” says Jaakko Aho, Actuarial Manager at the Finnish Centre for Pensions.

Pension financing and division of costs