Pension knowledge and trust in the pension system

Trust in the pension system, its future and functionality may also affect the perception of how acceptable pensions are and assessments of one’s own financial situation in retirement.

Surveys show that few Finns feel that they know pensions well. Some of the details relating to the pension system are well known while others are not.

Pension knowledge can be approached through perceived levels of knowledge or from the perspective of detailed knowledge. 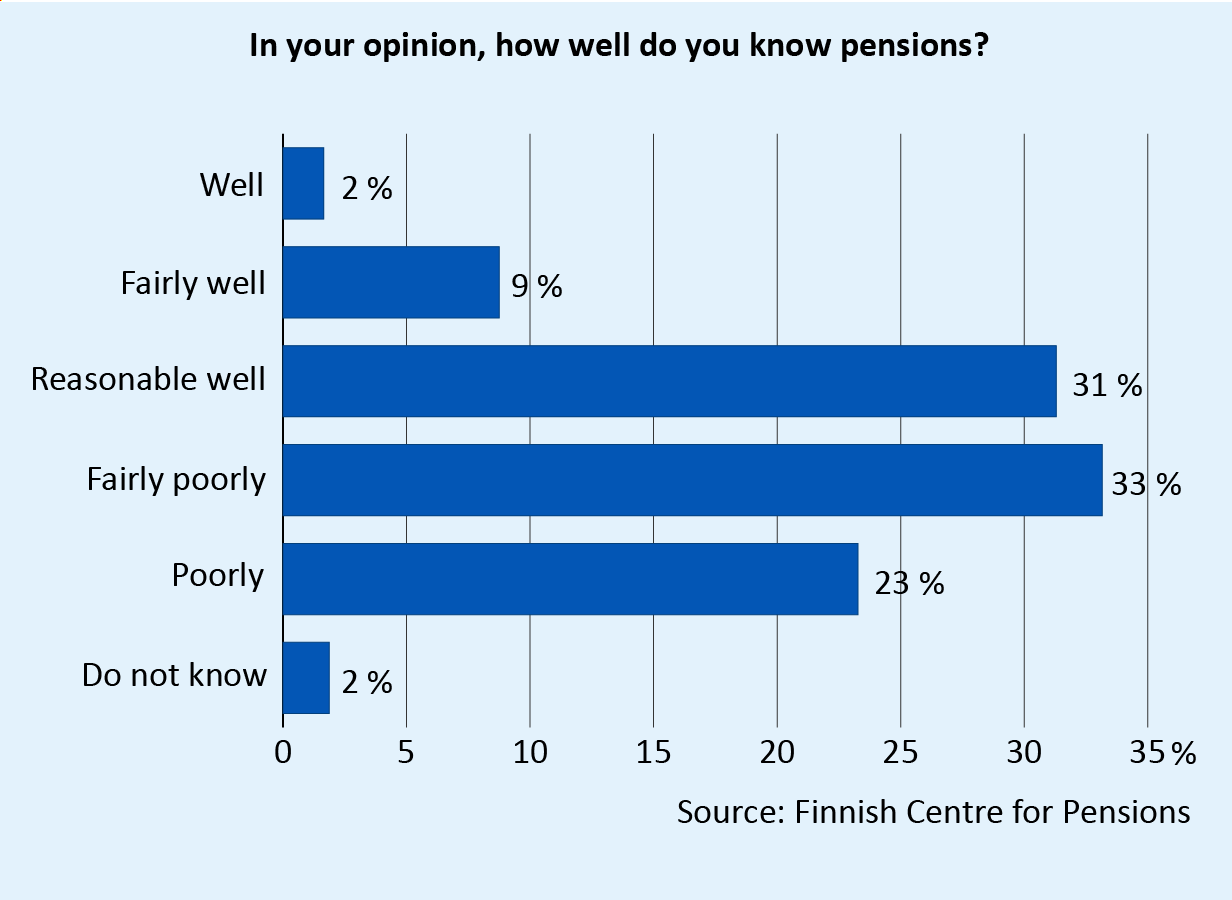 Pension knowledge has also been studied through the Pension Barometer, a survey in which 18–79-year-olds are asked about their views on pensions. Between 2017 and 2022, the perceived knowledge of pensions has improved. The share of persons assessing that their knowledge is poor or fairly poor has dropped from nearly half to less than one third. Correspondingly, an increasing number of persons estimate that they know pensions well or fairly well. Older respondents, in particular, feel that they know pensions better now than before.

Many unfamiliar with the 2017 pension reform

A pension reform came into force as of the beginning of 2017. The retirement age rose as a result of the reform. The reform also changed the rate of pension accrual and the effect of the timing of retirement on the pension amount. In addition, a new pension benefit – the partial old-age pension – replaced the former part-time old-age pension.

Around half of the respondents said they were aware of the rising retirement age, the possibility of the partial old-age pension and the increase in their pension amount if they postpone retirement. Least well known was the fact that, after the reform, the pension accrual rate no longer varies according to age. Two out of three respondents stated that they had never heard of this before. 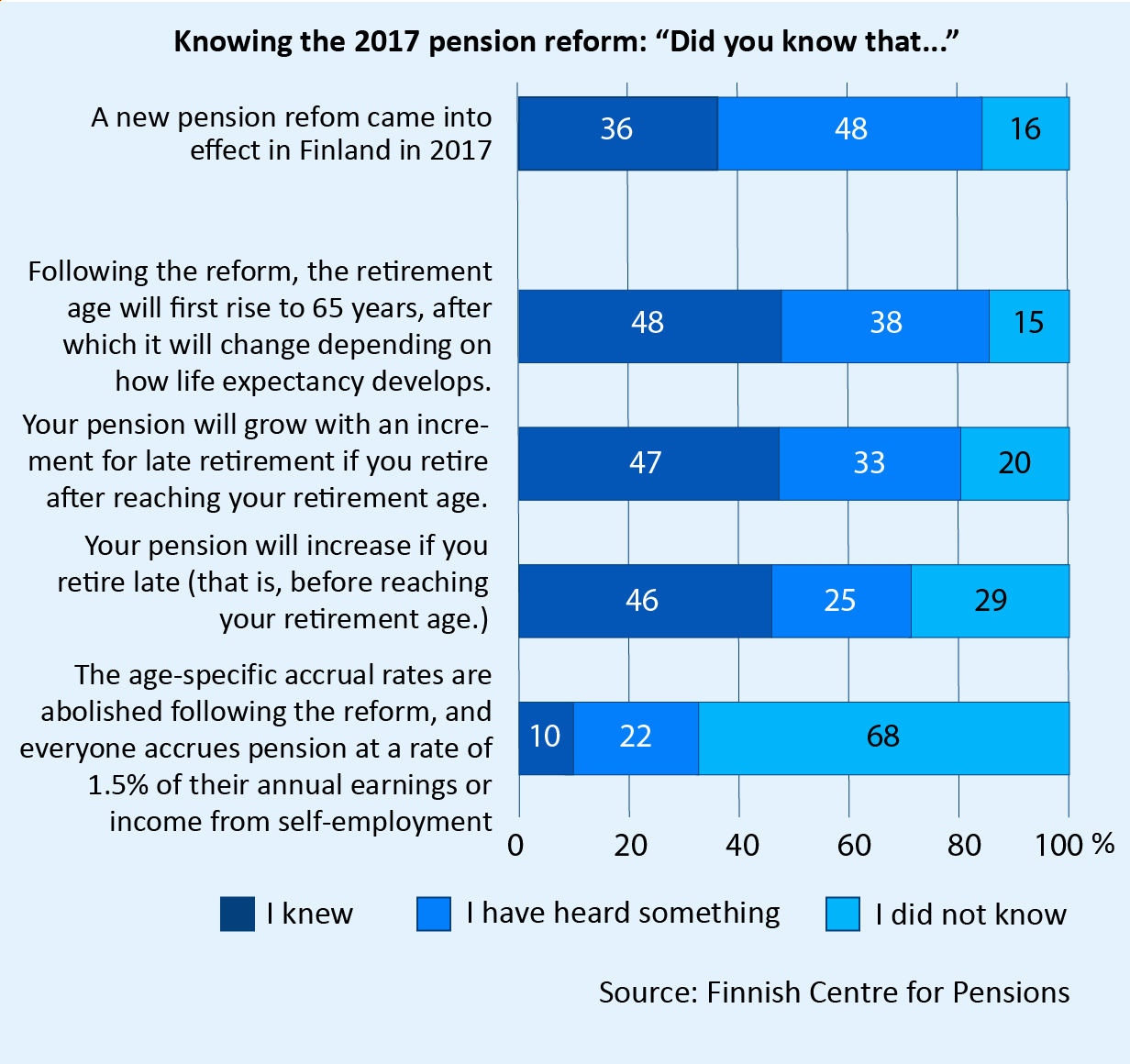 Varying degree of knowledge of features of the pension system

In the 2019 survey on views on pensions, pension knowledge was measured with five statements concerning details of the pension system. Some of the statements were correct while others were incorrect. 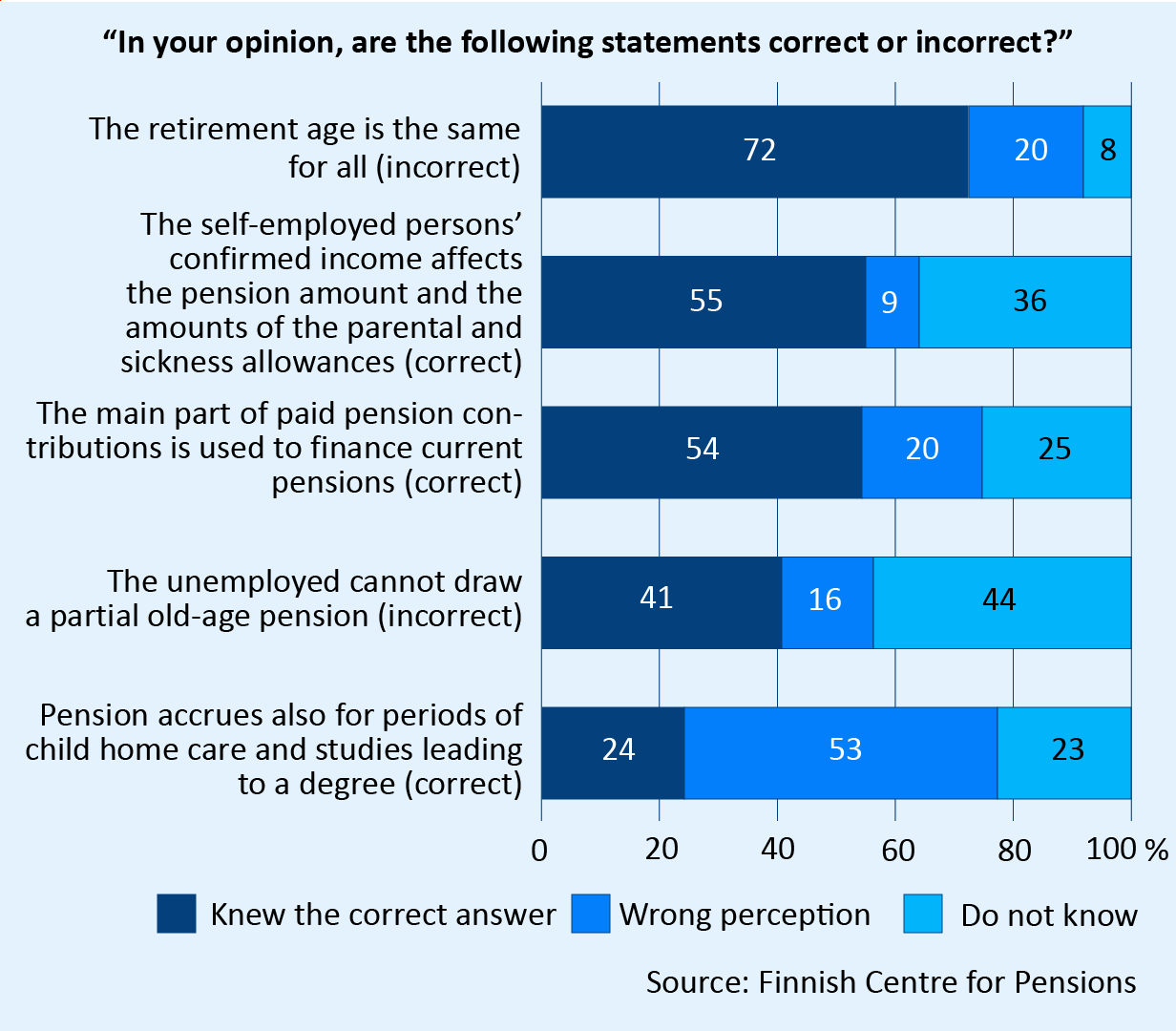 Most statements were identified correctly as either true or false. The retirement age for the old-age pension, the impact of self-employed persons’ confirmed income and the use of pension contributions were best known. Unemployed person’s right to the partial old-age pension and that pension accrues for childcare at home and studies were less well known.

In the 2019 survey on views on pensions, the respondents were asked to assess how many per cent of their wage a worker and their employer together pay in pension contributions (or the self-employed of their confirmed income). More than half of the respondents said they do not know. A majority of those who provided an assessment underestimated their pension contribution level. Of all respondents, 13 per cent provided an accurate estimate (with +/- 5 per cent error). In 2019, the average combined employee and employer contribution was 24.4 per cent. 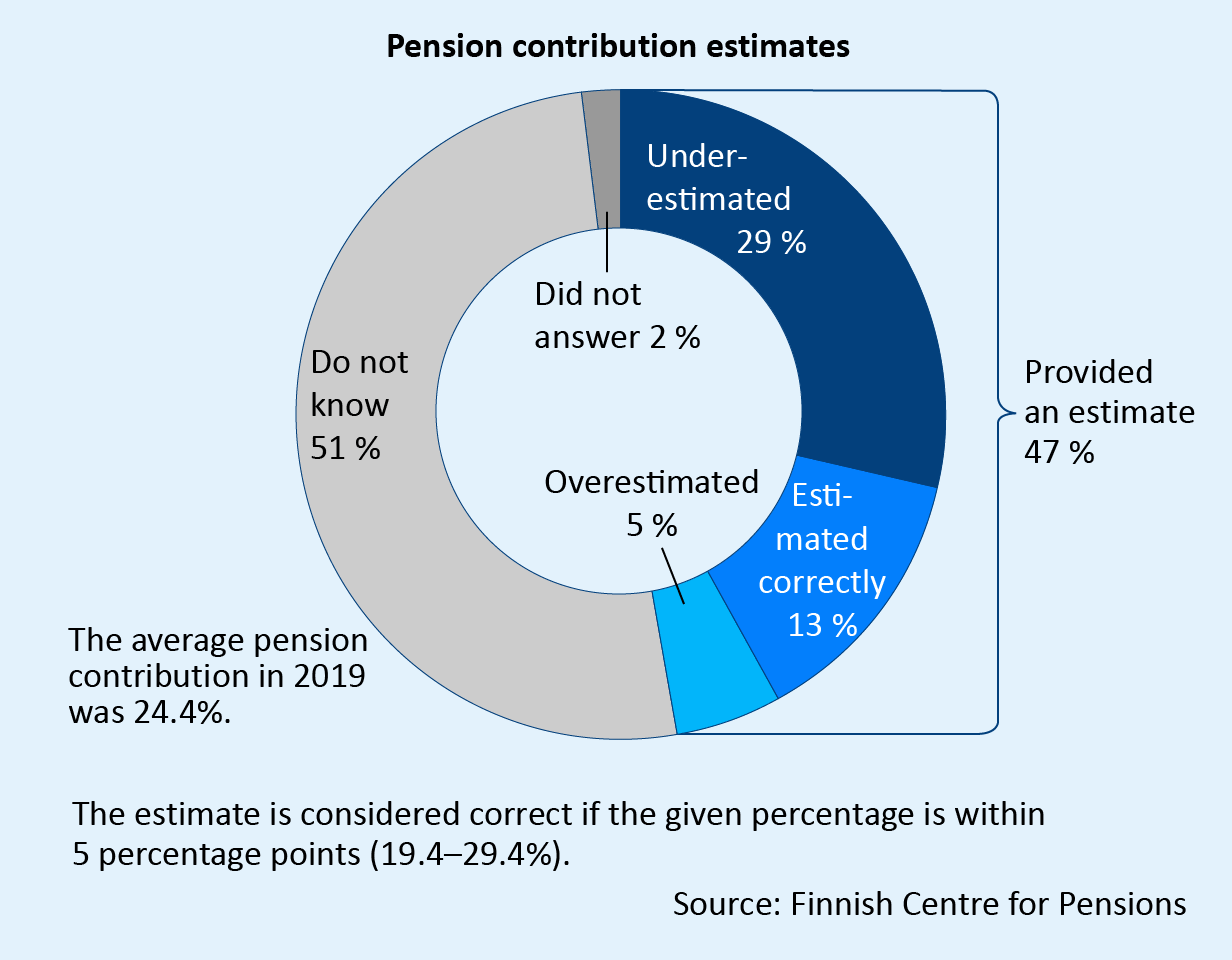 As a rule, Finns trust the pension system

According to the 2019 survey on views on pensions, more than 70 per cent of 25–67-year-olds found the Finnish pension system to be trustworthy.

The over-55-year-olds and those with a tertiary degree trusted the system more often than others. The under-45-year-olds, those living alone and those who felt in poorer health, on the other hand, were more critical. 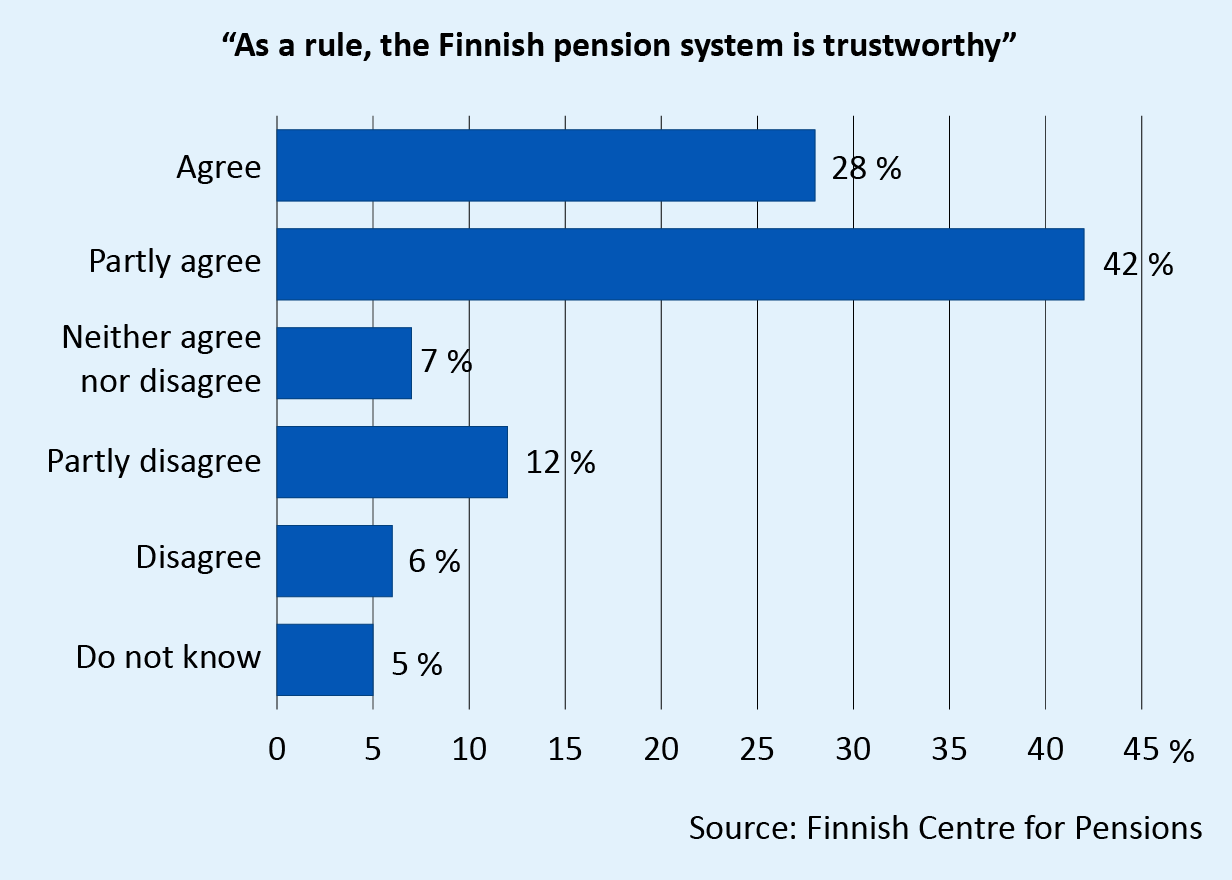 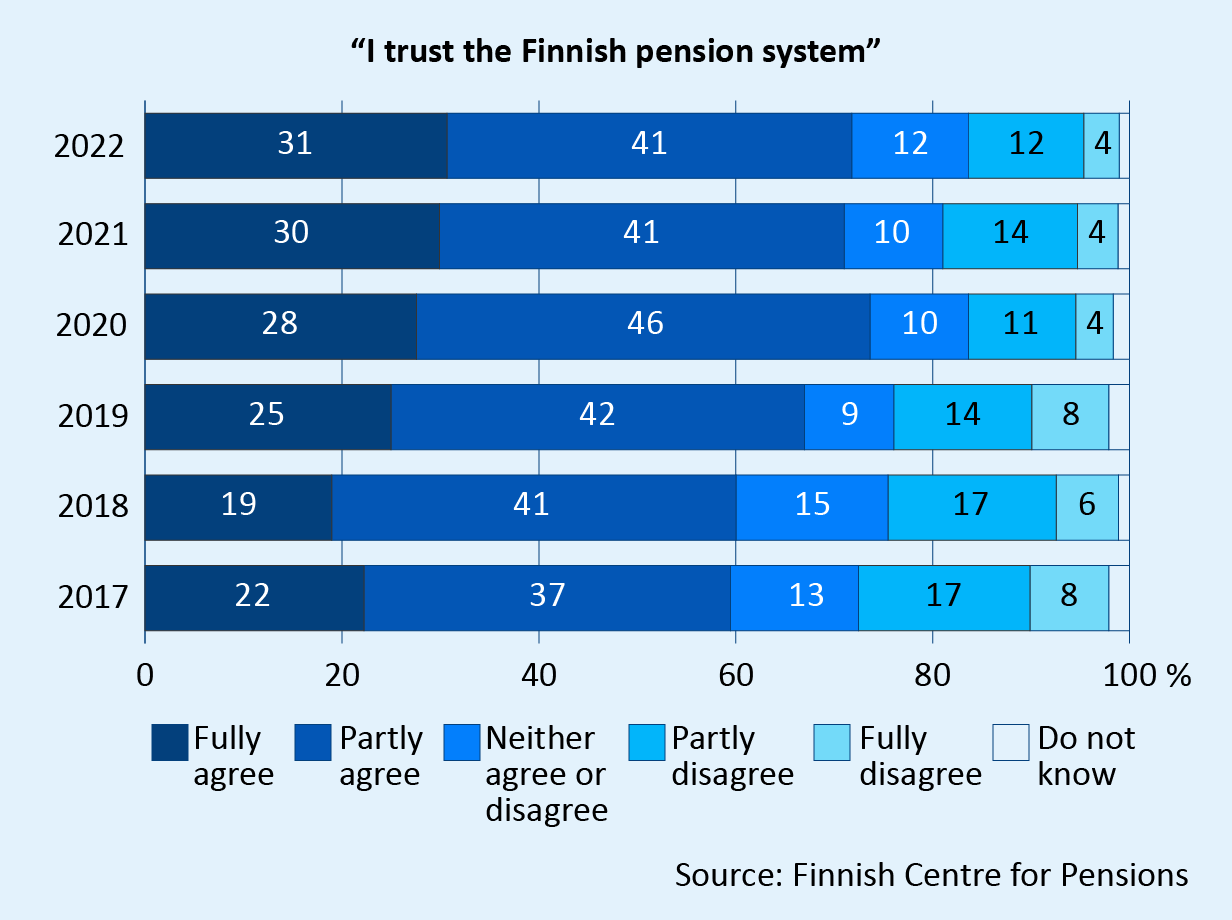 Trust in pensions is reduced by the following: experiences of inequalities, an insecure economic and employment situation, an ageing population and changing or weakening benefits.

The 2019 survey on views on pensions maps the views on the current pension system and its future. The views were divided on several questions.

Views on current status of the pension system vary

Slightly less than half of the respondents found that pensions ensure a reasonable income for current retirees. Nearly as many were critical about the adequacy of pensions.

An ample one third felt that pension assets were managed reliably, while one quarter disagreed fully or partly.

Only around one quarter of the respondents found the pension system to be fair, while nearly half disagreed. 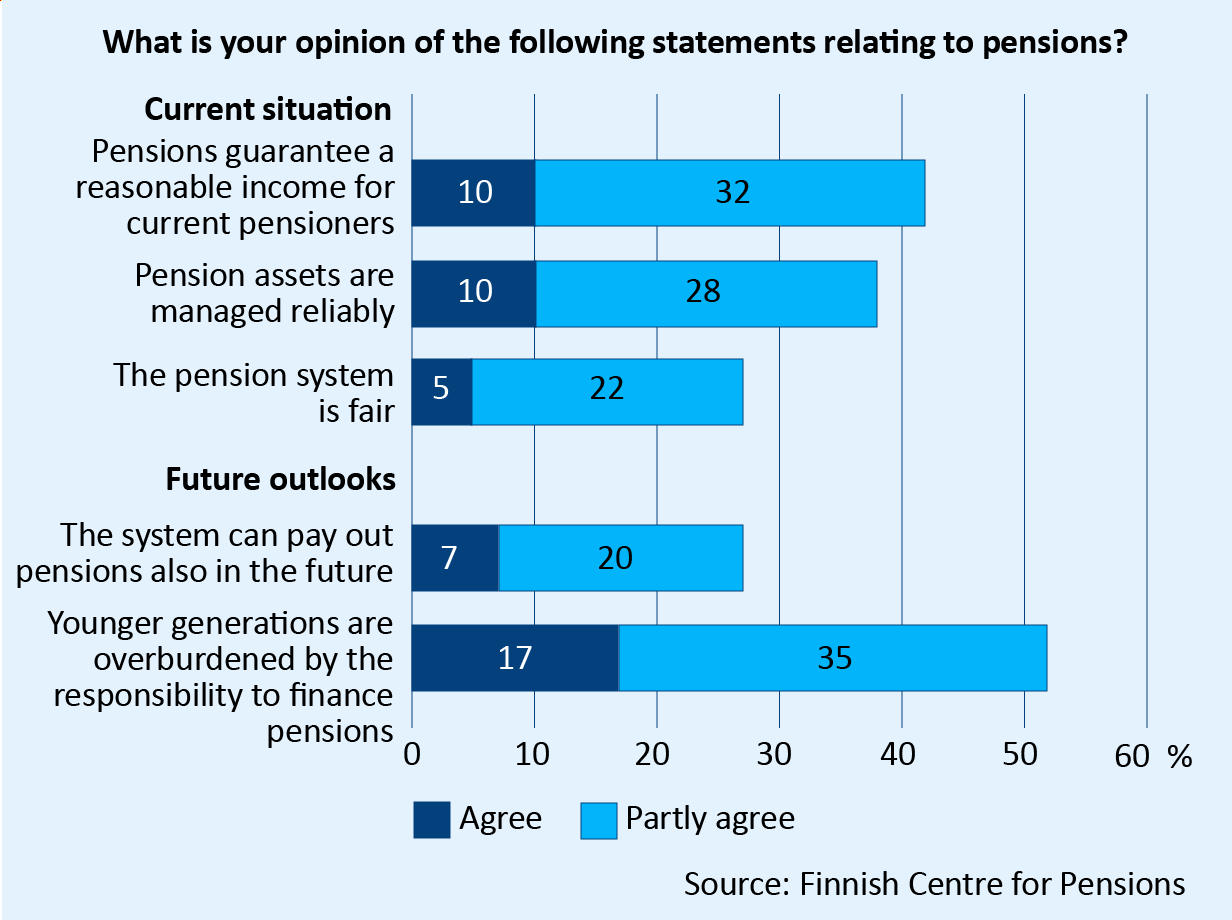 Future of pension system less trusted than the current situation

Only an ample one fourth of the respondents assessed that the system will be able to pay pensions in the future, and more than half felt that the payment burden of the young is too high.

Women, the young and those who perceived their health to be poor were more critical towards the pension system’s ability to pay pensions. The young and the respondents who did not have children were more often worried about the payment burden of the young.

Income concerns the most

Factors relating to income in retirement causes most concern. Three in four of the respondents of the 2019 survey on views on pensions were at least somewhat concerned about the livelihood of low-income pensioners. Around two in three were concerned about access to affordable social and health services.

Slightly less than two in three respondents were concerned about the uncertainty surrounding the conditions of retirement and political decision-making, the ageing of the population and economic and employment trends. Least concern was caused by pension asset investment risks. 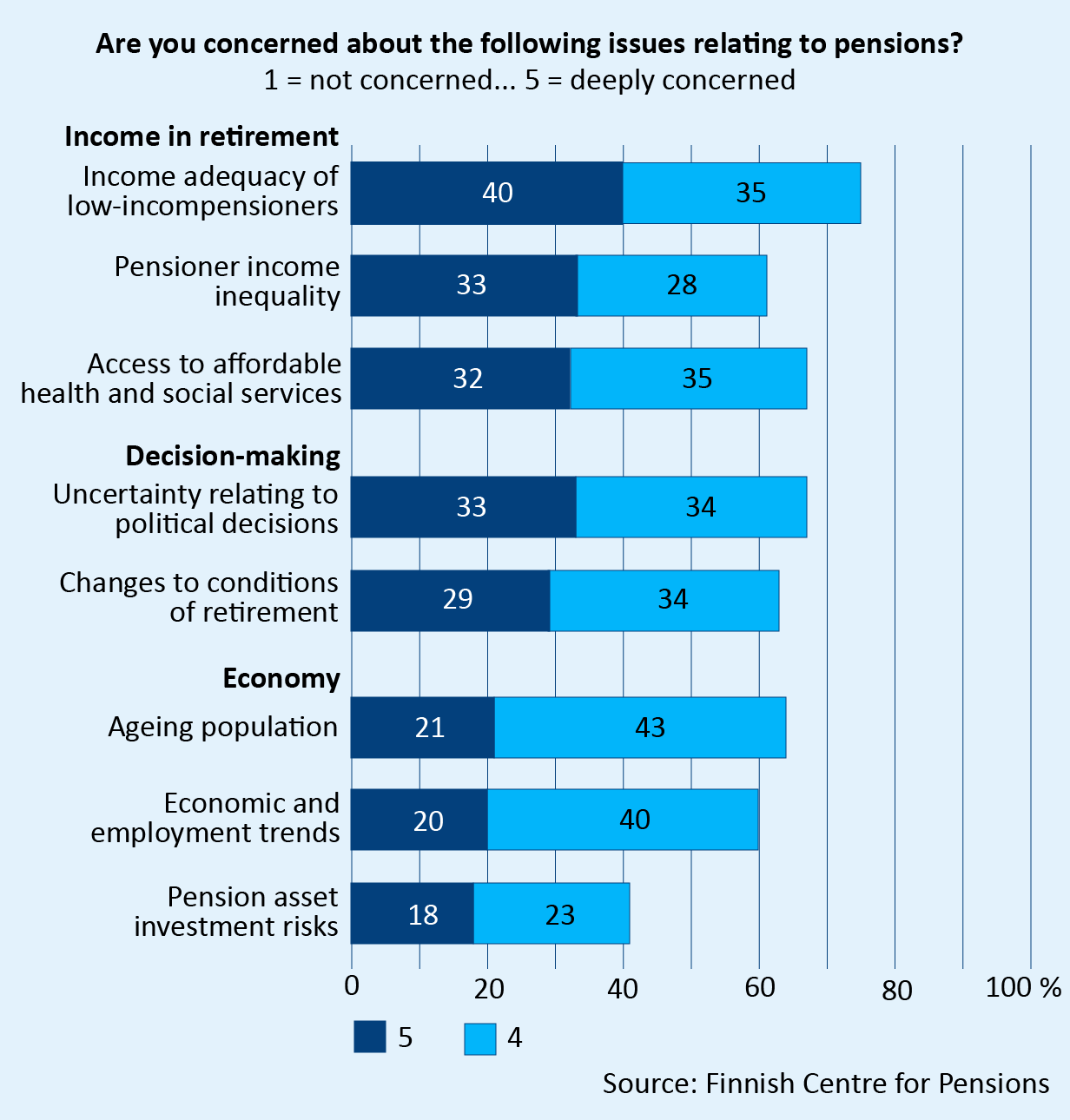 As a rule, men and those who perceived that they were in good health were less concerned than others regarding all presented statements. The young and those with a tertiary degree, on the other hand, were less often concerned about income in retirement and pension asset investment risks.

The pension barometer is an annually conducted survey that explores the views of Finnish citizens on pensions. Each year, around one thousand 18–79-year-old Finns have responded to the survey. In 2017–2022, the barometer has been conducted as part of an interview survey that Kantar TNS Oy conducts by phone.

The pension barometer examines Finns’ perceptions of how well they know pensions and will manage financially in retirement. The survey also includes statements on how the pension system works and whether it achieves its objective of providing an income. It also maps the general trust in the pension system and its future.

A report on the results of the pension barometer is published every year. It also includes comparisons with results from previous years. The reports are published in the Julkari publications archive.

Knowledge of the pension system, views on its operation and how it reaches its goals, as well as the trust in pensions have been examined since the early days of the Finnish pension system.

The 2019 survey on views on pensions examined, for the first time, also pension knowledge with detailed and objectively measurable questions. The survey included questions on the overall trustworthiness of the pension system, its current state and future outlook, as well as on what concerns people have about pensions.

The 2019 survey on views on pensions was conducted in September-December 2019. The survey was sent to 5,000 randomly selected Finnish citizens aged 25–67 years. 1,757 persons responded to the survey.

The next survey on Finns’ knowledge of and trust in pensions is planned to be carried out in 2024.

Research reports and articles have been written based on the 2019 survey on views on pensions and the 2011 and 2014 surveys on trust in pensions.