The economic wellbeing of pensioners has improved over the decades. The vast majority is not currently experiencing any significant livelihood problems. However, despite the favourable development, some pensioners still find it very difficult to make ends meet.

The aim of pensions is to maintain a decent income in retirement and to prevent poverty. Statutory pensions are the most important source of income for pensioners.

We study pensioners’ economic wellbeing and pension adequacy via pensions, income, consumption and perceptions to get as comprehensive a picture of income in retirement as possible.

Women’s monthly pension is one fifth smaller than men’s

The difference in men’s and women’s earnings also affects the gender gap in pensions. There is no large gender gap in the average employment rates, length of working life or retirement today, but the difference in wages is considerable also internationally. The uneven distribution of family leaves, particularly long periods of home care allowance, contribute to gaps in earnings and pensions.

Pensions make up a large part of pensioners’ income

Pensions make up slightly more than two thirds of pensioners’ gross income. Income in retirement reflects the person’s pre-retirement income level. Low earnings lead to a low pension. The person’s previous labour market status also shows in the pension level. For example, the pension level of a person retiring from unemployment tends to be lower than that of a person retiring from working life.

In the 2000s, the net income (gross income less taxes) of all persons who have retired from work or from outside working life have been, on average, 87 per cent of their pre-retirement net income. For those retiring from work, the net ratio has been lower, around 79 per cent on average. The difference is caused by the fact that retirement often improves the net income of the unemployed and others outside the labour force. 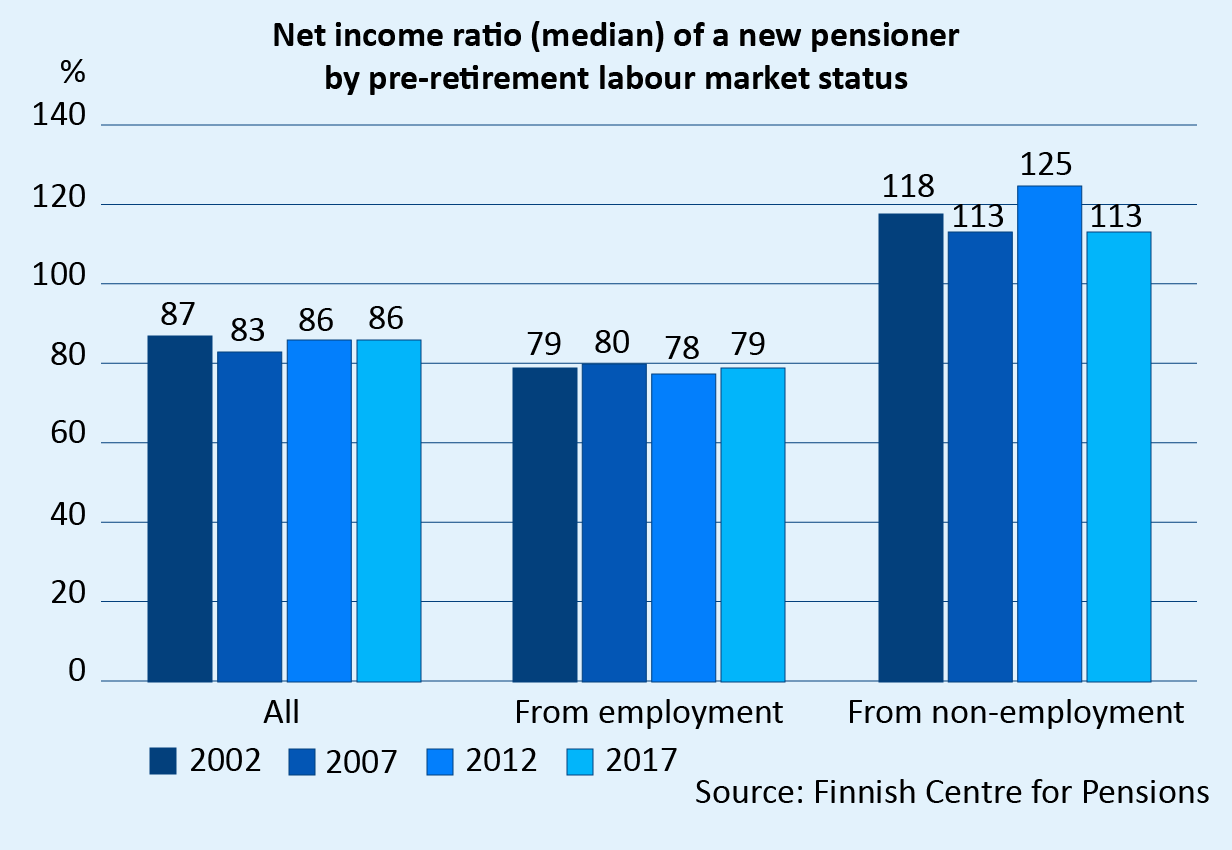 Pensioners’ disposable income is lower than that of wage earners and the self-employed but higher than that of the unemployed. Throughout the 2000s, pensioners’ disposable income has been around two thirds of wage earners’ income. This difference has remained fairly stable in the last few decades. Compared to the income of the unemployed, the income of pensioners has been an ample one third higher in the 2000s.

On the other hand, if we review the disposable income, which takes also account of the financial gain of home ownership (imputed rent) and other imputed income items, the position of retirees relative to the working population improves. 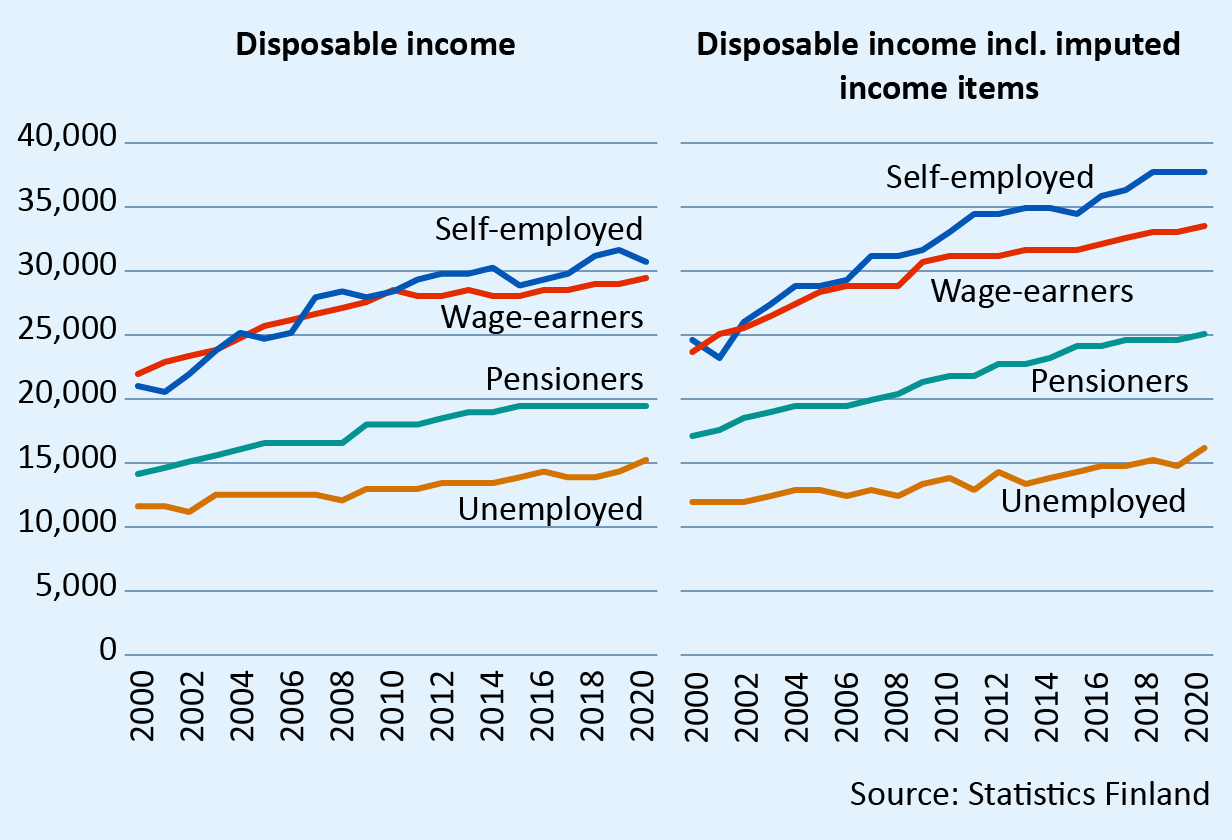 Benefit from public services evens out income gaps between pensioners

Public services support people’s wellbeing. The services can be viewed as part of the public income redistribution system. Low-income pensioners use public social and health services to a larger extend than do high-income pensioners. Relative to the disposable income, the monetary value of the services was particularly significant in the lower income quintile. 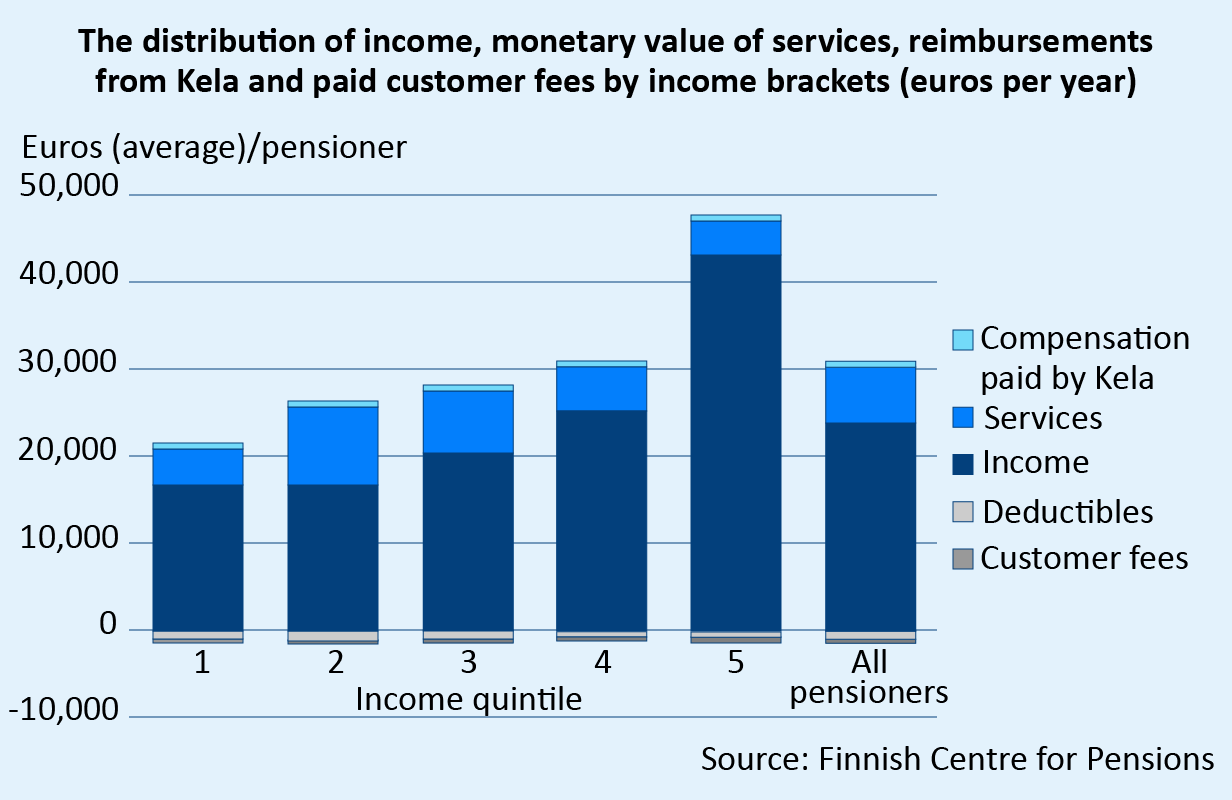 Pensioners’ income can also be reviewed from the point of view of consumption and perceived economic welfare. This gives a more comprehensive picture of pensioners’ financial situation. Reviewing by income only does not give information on, for example, what consumption level the income allows for or how adequate the income is perceived to be. 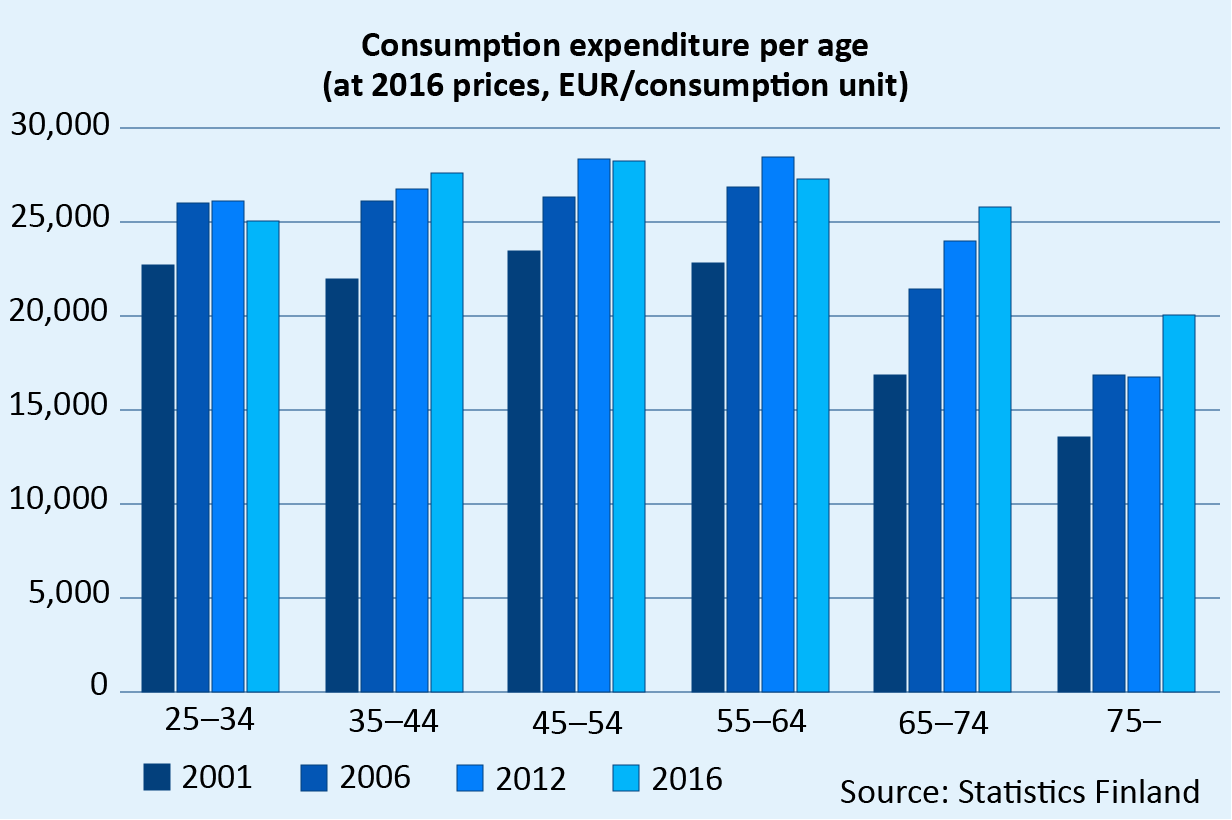 Housing expenses form the largest consumption expenditure item in all age groups. Housing expenses make up a particularly high share for the older population: in 2016, they formed almost half of the total expenditure for the age group 75 and over. Health care expenses are also highlighted in the consumption of those aged 75 and over. In contrast, the share of expenses for leisure time, restaurant and hotel services, as well as transportation and communication is clearly lower for this age group than for the younger ones. 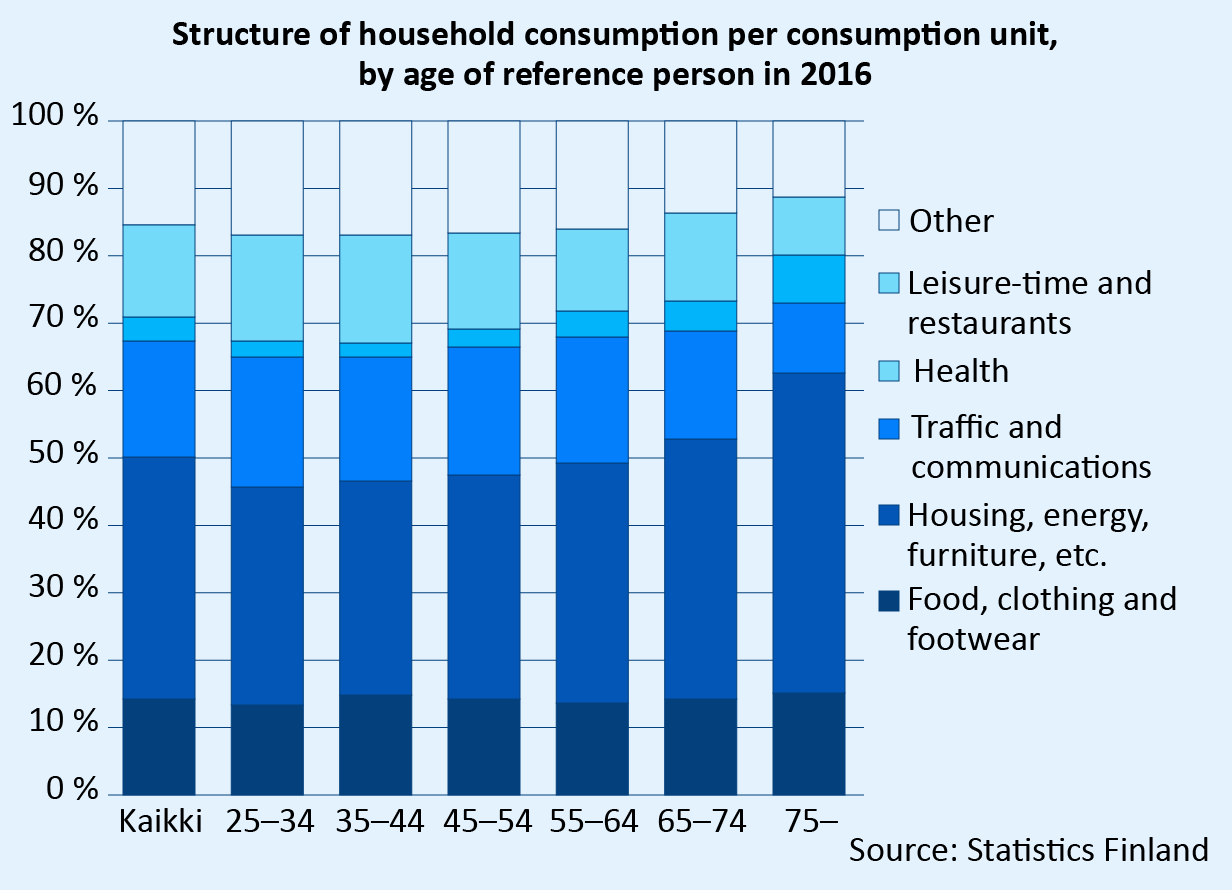 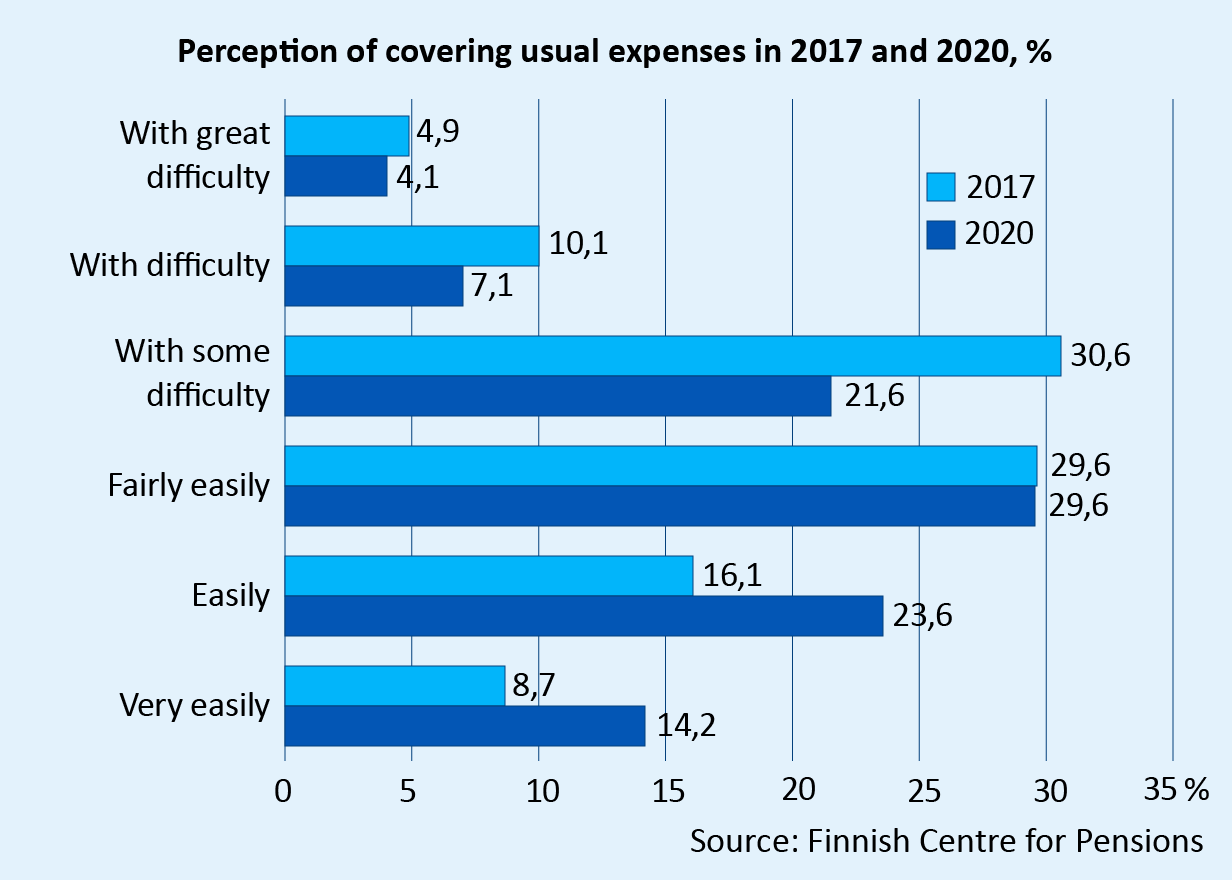 Most pensioners did not have to cut down consumption for financial reasons in 2020. If they did, they primarily cut down on leisure-time consumption and buying new clothes. Some were also forced to cut down on necessities such as food or medication. 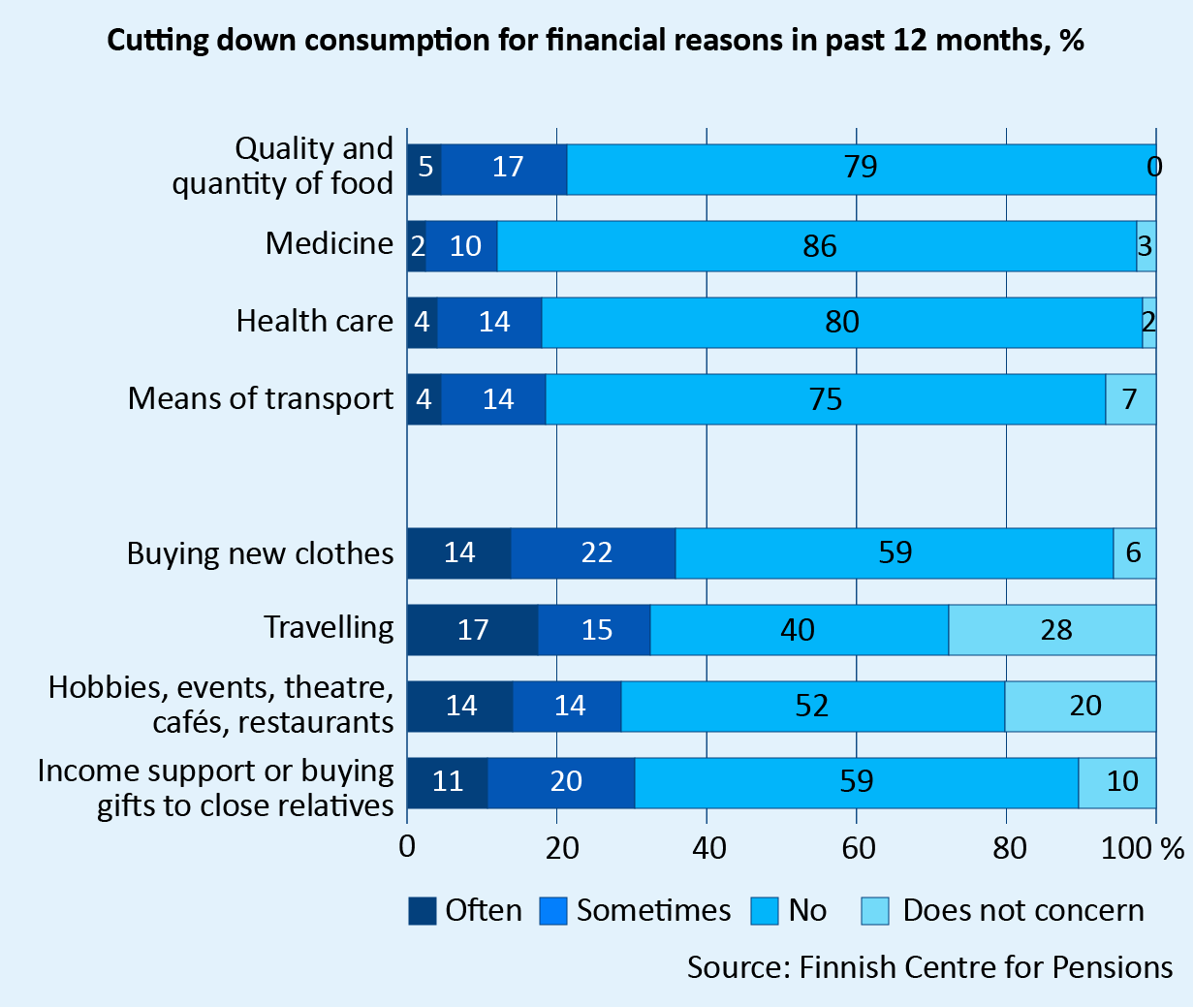 Typically, the income perceptions are permanent. Of old-age pensioners, around 60 per cent found it somewhat easy to make ends meet both in 2017 and 2020. This perception is most common among those in a better financial situation. Nearly 25 per cent experienced smaller or larger difficulties in both years, but for 15 per cent, making ends meet became easier. These groups were dominated by those with a lower-than-average economic status.

There is no single definition for poverty or way to measure it, and there is no official poverty threshold in Finland. Often, poverty is examined based on income. Other ways to measure poverty is severe material deprivation or receiving income support. Different methods provide a slightly different picture of how common poverty in retirement is.

In 2020, the at-risk-of-poverty threshold for a single-person household was 1,277 euros per month. The poverty threshold in euros varies from year to year along with the varying average income of the population, which affects the annual number of persons at risk of poverty. 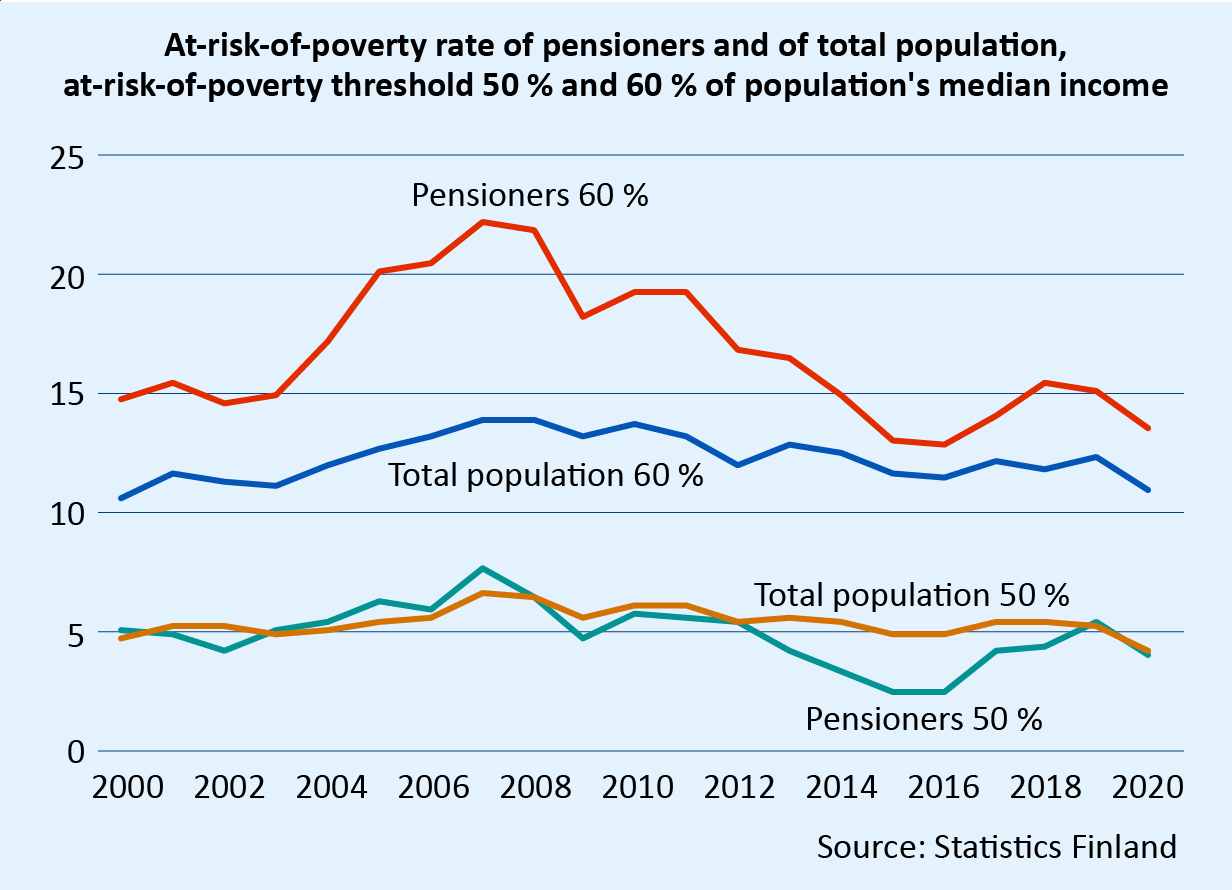 Pensioners are not a homogenous group in terms of income. Poverty is more common among the youngest and the oldest pensioners and pensioners living alone.

Risk of poverty among women aged over 75 is more common than among men, partly because there are many women over 75-years-of-age who live alone. Nevertheless, the gender gap has narrowed over the past 20 years as the risk of poverty among men living alone has increased.

Pensioners’ risk of poverty often inherited from time before retirement

Long-term risk of poverty (two out of three years of risk of poverty) is more common among people aged over 75 years. In particular older women risk poverty for a long time.

Of customers receiving food aid, around one third are pension recipients. Pensioners who have used food aid had received it for a longer period than others, but they experienced problems with making a living less often than others. Pensioners seeking food aid lived alone and were more often than others in poor health. In population surveys, a few per cent of pensioners have stated that they have had to resort to food aid.

An international evaluation of the Finnish pension system finds that the system efficiently averts poverty and provides a reasonable income for pensioners. Income inequality of pensioners is smaller than average in Finland.

Compared to other European countries, Finnish pensioners clearly less often experience income difficulties. The differences between other countries are visible in, for example, how often pensioners have been forced to refrain from doing things they want due to lack of money.

Other pensioners form the reference group in income comparisons of pensioners. Pensioners experience more problems with making ends meet in those European countries in which the average income of pensioners is higher. The income level or income inequality of the total population make no difference.

Regular surveys on the economic wellbeing of pensioners

Monitoring pensioners’ income is a central task of the research operations at the Finnish Centre for Pensions. Income is studied at regular intervals both via income data and surveys.

About every fifth year, the Finnish Centre for Pensions carries out an extensive study on pensioners’ income and its development in Finland. The following study was published (in Finnish) in 2022 (the previous ones were published in 2017, 2011, 2006 and 2003).

The study reviews the development of income in Finland from the point of view of pensions, household income and consumption, as well as wealth. It also includes a comparison with other European countries.

The Finnish Centre for Pensions conducted surveys on pensioner income and economic well-being in 2017 and 2020. The surveys were directed at 55–85-year-old pensioners on an old-age or a disability pension. Some of the respondents participated in both surveys. The response rates are high, which makes it possible to construct a comprehensive view of pensioners’ income perceptions.

The surveys cover experiences of income in general, income difficulties, saving, ways of solving income problems, giving and receiving financial assistance and income development. The questions in the 2017 and 2020 surveys are more-or-less identical. The survey in 2020 also included questions on debts, wealth, households’ economic margin, spending together with spouse, and obstacles to working in retirement. The surveys also included an open response section. 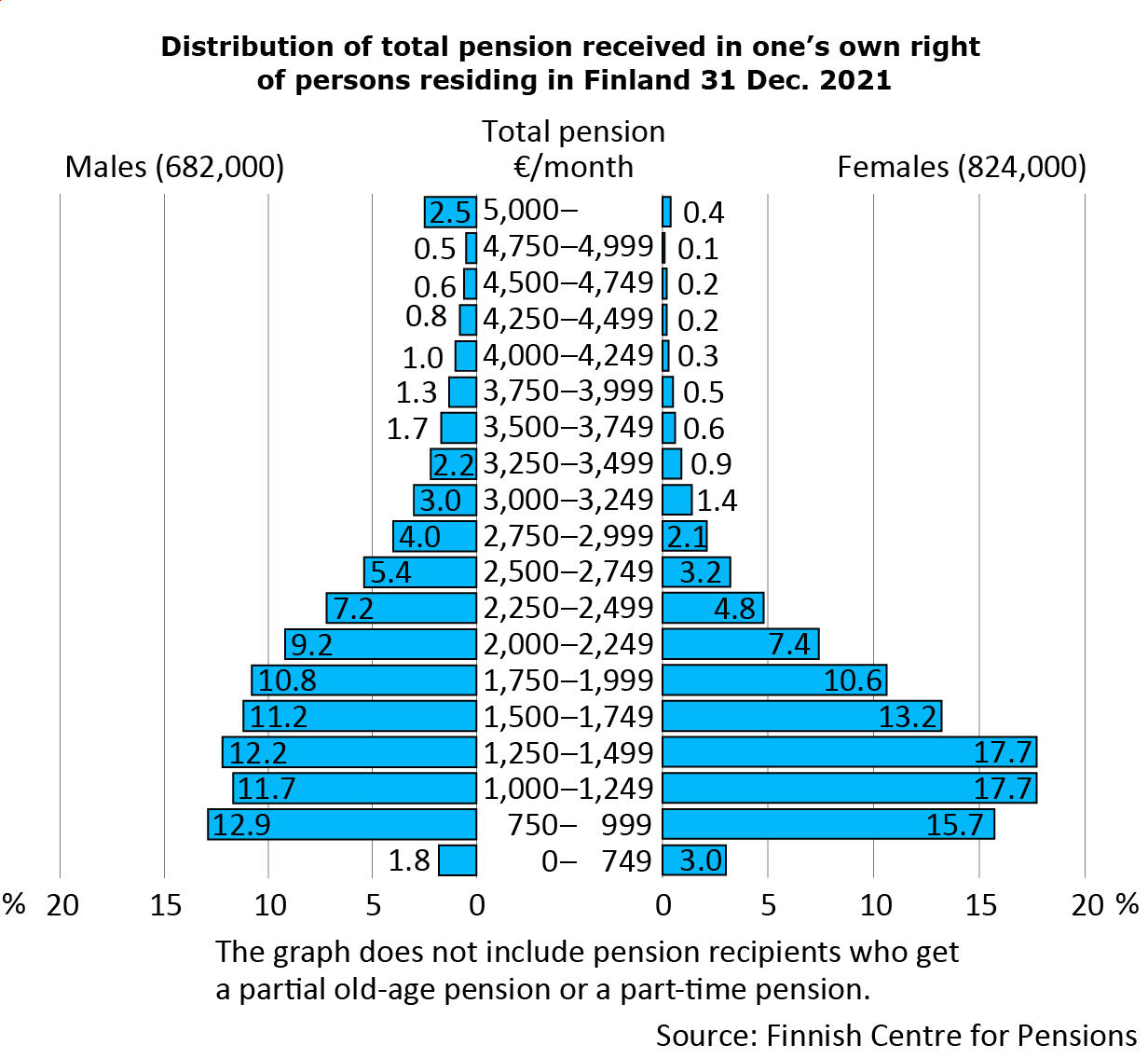 The disposable income includes the net combined income of all members of the household, such as pensions and other income transfers, capital income and earnings and income from self-employment. The amount is deducted with taxes and other fees. To make households of different sizes and of different ages comparable, the income is divided by consumption unit. This is the main definition of income used by Statistics Finland and Eurostat in their statistics on income distribution.

The other, often used definition of income – the disposable income including imputed income items– is a slightly wider concept than the disposable income. This income concept includes not only the monetary income but also imputed income items of which imputed rent is the most significant. It depicts the financial benefit that the household receives compared to a household that lives in rental housing.

The imputed rent can be significant particularly for pensioners since many of them live in debt-free owner-occupied housing. The disposable income including imputed income items thus improves the income position of pensioners relative to the rest of the population.