The effective retirement age has risen clearly in Finland in the 2010s. For a long time, the growth was slow, but it picked up following the 2017 pension reform. In a comparison between the Nordic countries and Estonia, Finland and Denmark have risen in the last decade from the bottom to the top three, with Sweden in the lead.

In all the countries studied, policy measures have sought to delay retirement. Indicators show that this has also happened.

Calculations reveal that the expected effective retirement age for 30-year-olds has increased the most (from around 60 to 63 years) in Finland and Denmark during the research period. In Norway and Iceland, on the other hand, the expectancy has declined. Sweden has maintained a high expectancy while Iceland shows a high degree of fluctuation, especially during the years following the financial crisis in 2008.

In recent years, all the countries have witnessed an upward trend. In 2020, the expectancy for 30-year-olds varies between 60 in Norway and 64 in Sweden.

Despite an overall positive trend, the results are not that straightforward. For example, even though the 2011 reform in Norway has led many seniors to work longer, Norway has witnessed a strong growth in the number of working seniors who are receiving a pension. After the 2011 reform, far more people, particularly men, work in retirement.

The data for the expectancy is based on national data on retirees. The data has been harmonized for comparability between the countries.

An exceptionally low number of Finns retired on a disability pension in 2021, which is why the effective retirement age rose more than expected. After the pandemic, the number of new retirees on a disability pension may return to the level at the end of the 2010s. In that case, the current record-low number may just be a statistical anomaly, which could also lead to a drop in the effective retirement age.

These statistics describe the effective retirement age under the Finnish earnings-related pension scheme.

Methods of data collection and source

The statistics are based on register data from the earnings-related pension scheme.

Time of completion or release

The statistics are released in the February of the year following the statistical year. The exact date of publication is given in the release calendar, go to www.etk.fi/en/statistics-2/statistics/release-calendar/.

The time series for the statistics start from 1996. Private sector time series extend back to 1983.

Average retirement age is the arithmetic mean of the ages of new retirees. Average age is calculated based on age at the onset of retirement.

Median retirement age is the midpoint observation for the dataset, i.e. half of the new retirees are younger and the other half older than the median. Median age is calculated based on age at the onset of retirement.

New retirees on an earnings-related pension are defined as persons whose pension based on their own employment started during the statistical year, or whose pension eligibility has started earlier but who have only received a decision on their pension during the statistical year. A further requirement is that the person has not received any employment-based pension in one’s own right (excluding part-time pension and partial early old-age pension) for at least two years.

Statistics for partial early old-age pension, which was introduced in 2017, are compiled using the same rules as for part-time pension. In other words, persons who have chosen to take early payment of a partial old-age pension are not counted as new retirees.
Survivors’ pensions are excluded from the examination of new retirees.

Sector-specific examinations are always focused on the sector concerned, i.e. the number of new retirees is determined based on pensions within that sector alone. In the case of the entire earnings-related pension system, it is required that the person has not received a pension from either sector for two years.

In this set of statistics persons insured for an earnings-related pension are defined as persons covered by the pension system who do not receive an employment-based pension (excluding part-time pension and partial old-age pension). The population insured for an earnings-related pension in the year under review is calculated based on the corresponding number at the end of the previous year.

The statistics on effective retirement age are compiled and published by the Finnish Centre for Pensions.

The costs of producing these statistics are borne by the Finnish Centre for Pensions.

These statistics describe the effective retirement age under the Finnish earnings-related pension scheme.

Average retirement age is the arithmetic mean of the ages of new retirees. Average age is calculated based on age at the onset of retirement.

Average is the most commonly used indicator in international comparisons of effective retirement age.

Median retirement age is the midpoint observation for the dataset, i.e. half of the new retirees are younger and the other half older than the median. Median age is calculated based on age at the onset of retirement.

Median is well-suited to describing the typical effective retirement age in a highly skewed distribution.

New retirees on an earnings-related pension

Persons retiring on a part-time pension or taking early payment of a partial old-age pension are not counted as new retirees.

Correctness and accuracy of data

The statistics are based on register data from the earnings-related pension scheme.

The numbers of new retirees, persons insured for an earnings-related pension and deceased persons in different age groups are derived from register data from the register sources. The analyses are based on total datasets.

Errors found in the statistics are immediately corrected online. A separate bulletin is issued in case of significant errors.

Timeliness and promptness of published data

The statistics are released once a year in the February of the year following the statistical year. The exact date of publication is given in the Finnish Centre for Pensions release calendar.

Coherence and comparability of data

The statistics have been compiled since 2003 and time series have been produced retrospectively back to 1996. Private sector time series extend to 1983.

Changes in earnings-related pension legislation must be taken into account when interpreting the statistics.

Availability and clarity of data

For further information on these statistics, contact the Finnish Centre for Pensions Statistical Services at tilastot(at)etk.fi.

The expected effective retirement age describes the average effective age of retirement for insured persons of a certain age, assuming that the retirement risk and mortality for each age group remain unchanged at the level of the year of observation.

The expected effective retirement age is obtained by first calculating the mortality and retirement rates for each age group in the year of observation. These rates can then be used to calculate the number of people who in a group of insured persons of a selected size and age (say 100,000 insured persons aged 25 years) would retire within one year. Until the end of 2004 the general retirement age in Finland was 65 years. For 2004 and earlier, therefore, the termination age used in the formula was 65 years. With the introduction in 2005 of flexible old-age retirement between ages 63 and 68, the upper limit in the formula was increased to 70 years. It is estimated that this hike in the termination age from 65 to 70 years increased the expected effective retirement age by just over 0.1 years.

It might be tempting to add to this list the requirement of international comparability, but it may be difficult to obtain comparable data other than for the Nordic countries. 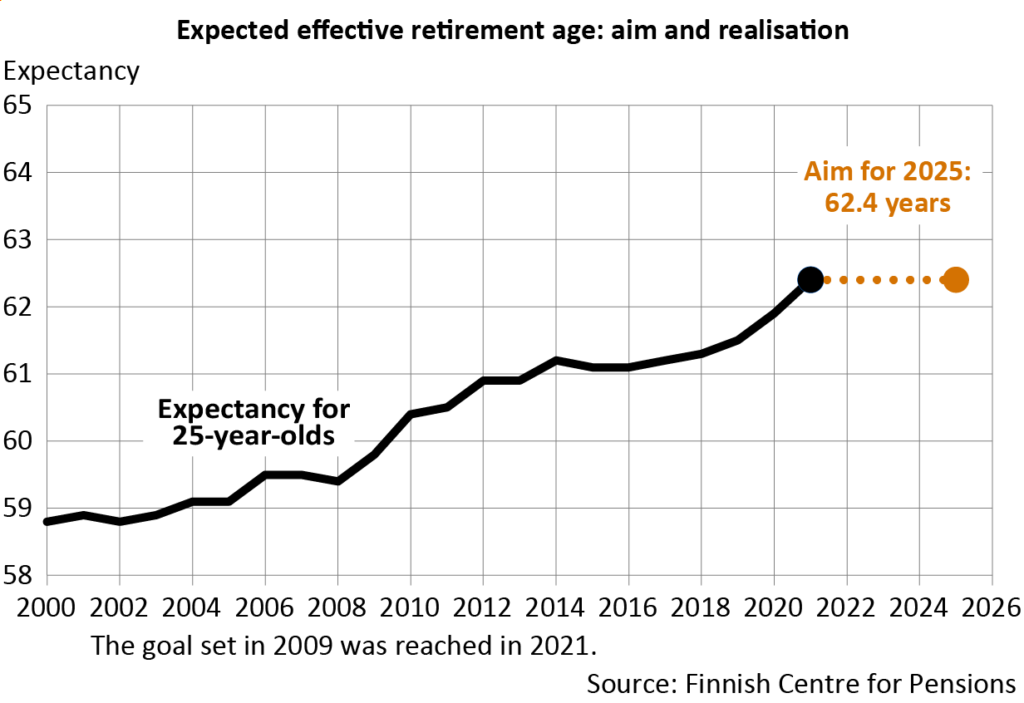