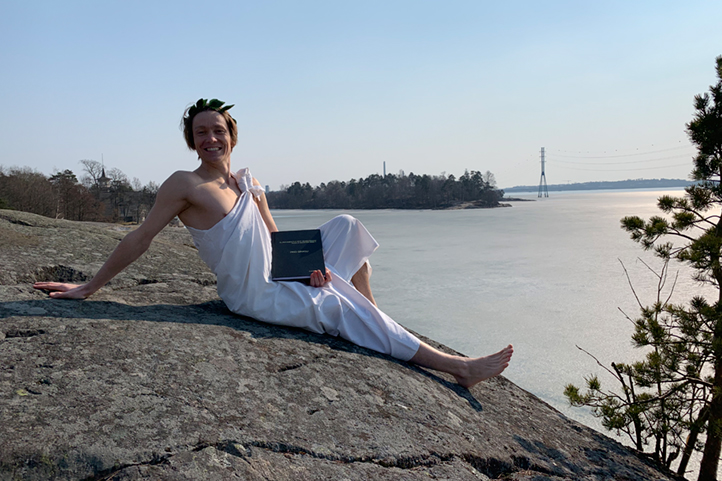 Each year, the Finnish Centre for Pensions grants a Pro Gradu Award to a distinguished Master’s thesis. This year, the award was granted to a thesis from the Tampere University on the 2017 pension reform. In his thesis on public law, the author of the winning thesis Jussi Karhunen examined how lobbying organisations that represent the young affected the 2017 pension reform.

The Finnish pension system and Government are not as black as they are painted. This was the conclusion that Karhunen reached in his pro gradu thesis “Eläkeuudistus 2017 – Kuiskatenko kuului nuorten ääni?” (pension reform 2017 – the voice of the young a whisper only?).

“The social partners negotiate on pensions, but the Government sets the goals and the terms. Contrary to the picture paid by media, reality is not packed with contradictions”, Karhunen states.

The same applies to the young – they have not positioned themselves outside pension policy. Karhunen observed in his research that the aims set by the lobbying organisations of the young were successfully realised in the reform. In fact, the influence of the young was greater than what Karhunen expected when he started working on his Master’s thesis.

“The young can be compared to the background choir of a pension opera. The choir is not the leading star, but in overall terms, its voice plays a significant role in the opera”, Karhunen explains.

Karhunen found the idea for his Master’s thesis on his bedside table.

“I got interested in the pension reform as I read Jari Hanska’s and Teemu Muhonen’s book ‘Eläketurma’ (pension accident). One day, as I was having coffee with director Nikolas Elomaa (Finnish Pension Alliance TELA), the pieces of the puzzle clicked into place.”

The dataset of Karhunen’s Master’s thesis consists of the official legislation material and theme interviews with eight of the key pension negotiators.

Charting the lobbying and legislation process made Karhunen realise that the duty of prior consultation needs to be reformed.

“The sense of participation and the degree of legitimatization would improve and the preparation of pension acts would become more transparent if the State would make it obligatory for the social partners to hear different interest groups before starting the actual pension negotiations. At the moment, unlike authorities, the social partners are not subject to the duty of prior consultation.”

Wide-ranging and analytical thesis about the core of pension policy

Karhunen’s thesis hits the core of pension policy and sheds light on authority relationships. It also shows the mechanisms of decision-making.

“The birth of the reform has not yet been studied from a politico-sociological point of view. With his thesis, Karhunen provides new, important information on the subject,” assesses head of research at the Finnish Centre for Pensions, Susan Kuivalainen.

This year, the winner of the Pro Gradu Award was selected by Hannu Uusitalo (Dr. Pol.Sc.),  former director of the Finnish Centre for Pensions who retired in 2013. In his statement, he describes Karhunen’s thesis as inspiring. In addition, the thesis proves Karhunen’s wide knowledge of the field.

“Karhunen carefully describes the process of the earnings-related pension reform, picks out the essential actors and analyses the role of student associations in this reform,” Uusitalo analyses the winning thesis.

The Pro Gradu Award of the Finnish Centre for Pensions is granted to a distinguished Master’s thesis on a topic of interest to pension provision, accepted at a Finnish university in the previous calendar year. The discipline is not limited. The award is 2,000 euros.

Jussi Karhunen’s Master thesis (in Finnish with an English summary) will be published in the autumn in the Finnish Centre for Pensions’ publication series.